A Day in the Life of a Wild Llama

He didn’t have a name, but if a name had been appropriate he would be called Pacha Kuyuy, the Quechua word for earthquake. An hour after he was born, a mighty quake had rattled through the Andes. That was 8 years ago. Today he had been awake, on alert, for most of the night. It would begin to get light in an hour and the girls would start to rise in 30 minutes. He stood up, shook the stiffness from his body and silently made his way to the dung heap. He completed his morning toilet and silently navigated to a raised section of rock which afforded him a vantage point from which to observe the girls while also keeping watch. There were seven adult females in his group, each with a chullengo born the previous week.

The mothers lay in a partially offset position,allowing the babies contact with their tummies and acting as a barrier to the cold night wind. He was very pleased to have a 100% birthing success, it was rare in the Andes. He marvelled at how the girls could manage their pregnancies such that all babies would be born within a few days of each other, he know the matings had taken place over two weeks. But for reasons of safety, having them all born closely together was a blessing. 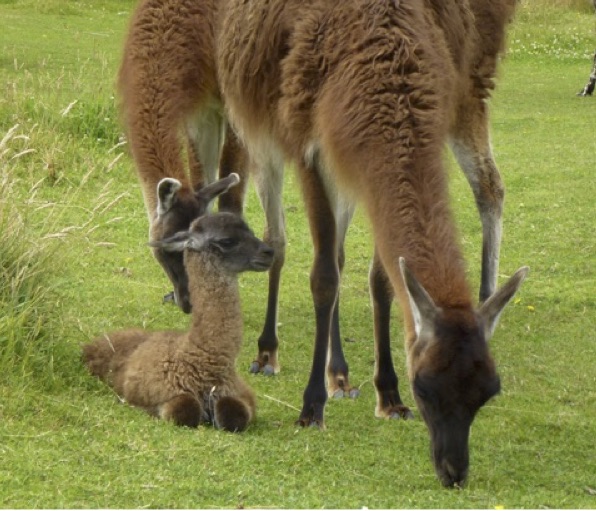 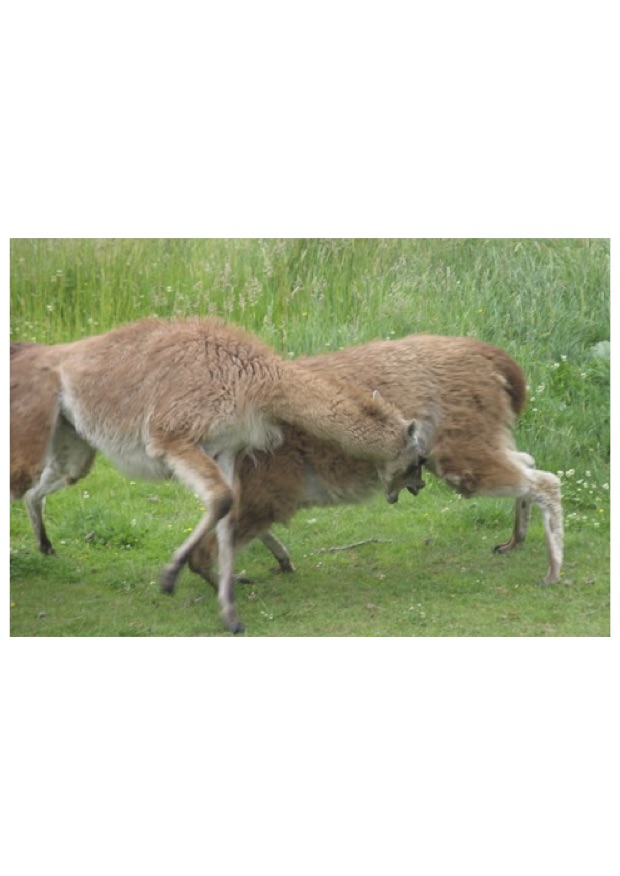 The area he had selected for the group was over 100 acres in size, with a small creek running down one side, a gentle slope the other, rocky outcrops at the top and leg high bush at the bottom. It would be difficult for a predator to approach the area unseen. There also was a natural corridor which allowed him to move the group to a more elevated temporary area if warranted for reasons of safety. He had designated 3 sleeping areas, each determined by the wind direction and close to quality day time grazing. his dung heaps were established not far from the sleeping areas but also in a direct line with any passing mobile family or male groups and where from strategic vantage points he could observe any approaching solo males who would challenge for his herd.

He watched now as the girls all stood up and wandered to the dung heap, mindful of their position in the herd hierarchy, each followed closely by their chullengo. After each girl had in turn freshened the dung heap, she would wander to the grazing area to begin her morning feed as the youngster followed and commenced to suckle. He strictly enforced the herd requirement that all defecation took place on established dung heaps and he purposely freshened them regularly as a constant reminder to the girls.The communal dung heaps kept the grazing areas free of parasites and also served to attract wandering or low hierarchy herd girls, permitting Pacha Kuyuy to allow them to remain, or conversely drive them away. Any outside male crossing the line of the dung heaps was an open declaration for combat which needed to be answered quickly and with intent. Pacha Kuyuy had joined a bachelor herd himself at age 15 months, wandering with them in constant search for grazing and browsing. The days were filled with play fighting, building strength, stamina and prowess for the day when he himself might challenge an alpha male. At the age of 6 he had left the herd , striking out on his own. He challenged and fought for several herds before successfully bettering a much older male who tragically limped off into the gathering darkness.

He scarcely had time to heal his fighting wounds before having to deal with the herd females. Two older girls slipped away during the first night and he had to physically restrain two others from leaving. Gradually he had become become accepted and the girls soon began to look to him for guidance, protection and a regular supply of grazing. He instinctively knew that in a few weeks they would come to him for matings. He had learned there were certain matters which the girls took to heart! They seemed to know everything related to having babies. There was nothing else more important to them. They could sense gestation period dependent upon the weather and other factors – it could be from 10.5 to 11.5 months and all chullengo needed to be born within days of each other. They knew exactly when they had to be mated, and that task could not be completed by anyone except him. When he took over the herd, it was not a sedentary group and he had led them on a wandering tour for months before selecting this area where they established themselves as a Permanent Territorial Family group.

Above them, he had found an area fed by natural springs but it was well over 4,000 meters as well as being too steep and rocky to suit his needs. It had since been taken by a family of vicuna who preferred the natural water supply and rugged terrain, such an area was often called a bofedale or mojadale in the Andes. The adult male responsible was very aggressive towards passing vicuna and Pacha Kuyuy noted with interest how he drove all male and female crias permanently from the herd when they were 8-10 months of age whereas himself, he allowed the chullengos to return once the new season’s babies were born. He allowed them to stay with their mothers once again until they reached the age of about 15 months whereupon he drove them once more from the herd, this time not to return.

The greatest threat to his family was from the puma. Seeking to prey upon the young, old or infirm but equally willing to accept a careless healthy adult. Pacha Kuyuy knew their habits well and was constantly on alert for their sign. Like all guanaco, he alerted the family to the puma’s presence and then practiced a strategy to keep the large cat within sight while maintaining a safe distance, only fleeing when an actual assault occurred. 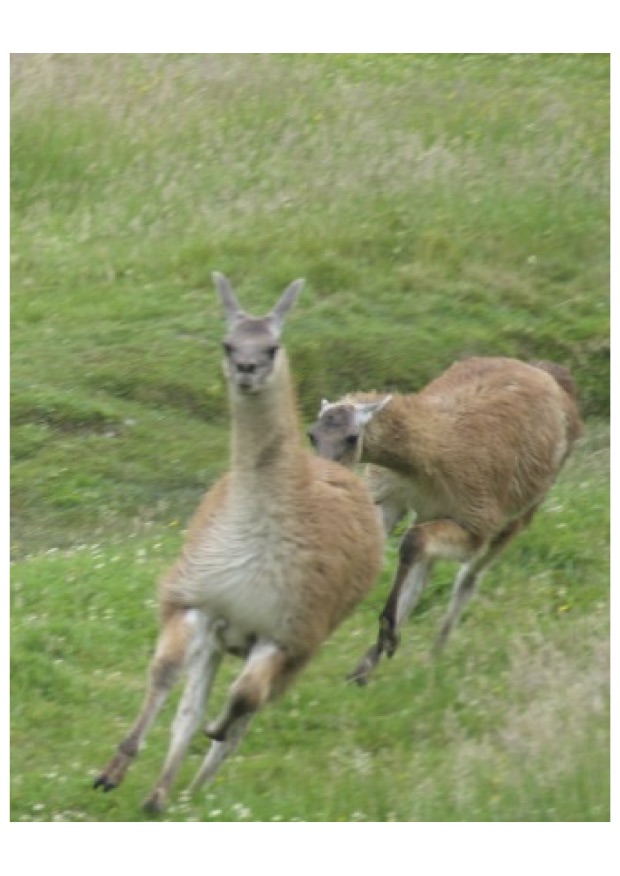 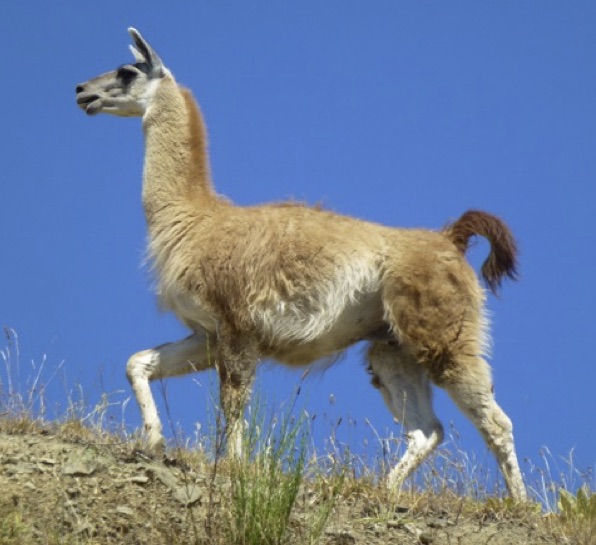 It is the way of the wild llama that only the strongest males with the sharpest instincts are able to dominate and support a group of females forming them into a family group. It is the system known as Natural Selection which dictates that only the finest males get to pass on their genetics, it is how the species has survived.

Pacha Kuyuy mated his first female at the age of 6 and by the age of 10-12 he would be vanquished by a younger male who still had to endure the years of combat that would take a toll on his body. It would be very rare for a female to be mated before she reached the age of 3, and she would normally bear a chullengo every other year until she reached the age of 12 – 14. Instinctively adapting to climate change, drought and the unceasing reduction in natural habitat caused by the encroachment of humans with their fences, railroads, domestic herds, hunting and poaching.

Pacha Kuyuy did not understand it, but he knew it was happening, and it was a worry to him. Author’s Note : Many thanks to Dr William Franklin for his years of studying the wild vicuna and guanaco, and my friend in Canada Brian Pinkerton for sending me copies of the resulting report studies. All photos were taken by myself from my herd of wild llamas in New Zealand